Continuing on the end of the world prophecies, we are having weird erratic weather pattern all over the world. Yesterday France took a hit. There is a forecast that t winter State College might encounter both record high and record low temperatures!
And then there is a hypothesis of aggression of Vermiform Appendix.

Obama's presidency's first term ends in end of 2012. Is that another indication?
Posted by Somesh at 1:48 PM No comments: Links to this post

I needed some boost to thaw the frozen blogging part of my brain. Gaurav has this hypothesis: in winter people blog less because it is winter.

Then yesterday I received this magazine with the advertisement that reminded me another ad jingle from India; and I felt it is time, just write something. 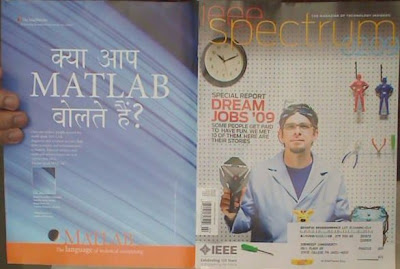 First I was surprised to seen Devnagari in a magazine like this in US. But if you think deeply, it not unexpected. Growing population of Indian and Chinese technologist is not a new fact. No wonder use of Devnagari or Han characters will become more and more common. In fact someone was telling me the other day, that Indian English is going to dominate American or British English in twenty years! Let linguists research on those issues. The fact is Indian English is very common now, so is Hindi. First time I went to New Jersey, the first full sentence I heard when my friend parked the car, was a Hindi sentence.
But more surprising to me is the tone of the advertisement. Is this an indication of slow cultural invasion ...

Finally one more item from my wish list is going to be crossed out. 'Hair' is returning on Broadway from Mar 31, 2009.
Let the sunshine in ...
Posted by Somesh at 1:35 PM No comments: Links to this post

A Merry Minuet for the New Year ...

They're rioting in Africa
They're starving in Spain,
There's hurricanes in Florida
And Texas needs rain.
The Whole world is festering iwht unhappy souls
The French hate the Germans, the Germans hate the Poles
Italians hate Yugoslavs, South Africans hate the Dutch
And I don't like Anybody very much.

They're rioting in Africa
There's strife in Iran
What nature doesn't do to us
Will be done by our fellow Man.

A fifty years old song to celebrate the end of 2008 and onset of 2009!
And here is the trailer of the movie to watch in the New Year.

Posted by Somesh at 9:03 PM No comments: Links to this post